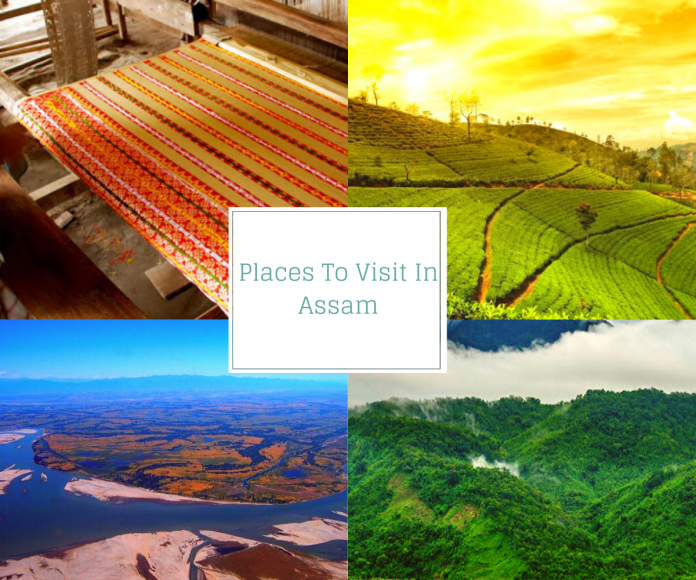 Assam is a treasure of natural beauty that is filled with a diverse history and is amongst one of the few places untouched by the Mughal Emperor. It is situated in the north-eastern region of India and divided into upper Assam and lower Assam. The state is known for its lush green tea plantation, stunning waterfalls, rich wildlife and a true sight for the sore eyes. From getting close to nature to experience some of the fine delicacies of native food, the state offers all kinds of mysterious experiences that will surely stay with you forever.

Besides being the world’s largest river island, it is also so simple and easy to fall in love with the sight. The best place to visit if you want to get away from your chaotic life. Most of the thing there is handmade and hand cooked. It is a natural paradise in the middle of the Brahmaputra River which is also an abode of beautiful and unusual migratory birds and it surely should be in your top of the list to visit as it may disappear in the next 10-15 years due to its constant flooding.

Kaziranga National Park is geographically situated in the midst of greens and shining water and it’s the most important jewel is the one-horned rhino and the beautiful tigers. There is so much one can do and see in here from watching amazing folk dances to magical safaris, from trekking to bird watching, from tribal village visits to aromatic coffee and tea plantation visits, there is something for everyone. You can also visit the ever so beautiful National Orchid Park located 2km from the Central Range where there are 500 different spices of orchid and bathe in the sparkling water of Kakochang waterfall is a must.

Also known as the ‘Manchester of East’ is a small village known for its fine weaving technique has a ton of heritage and culture within it. This weaving village has one of the best craftsmen for producing silk in the whole country. You can truly see the true essence of the place through the bamboo build house covered with mud to keep it cool during summer and warm during winter. The world-famous golden Muga silk are produced here. This village is filled with beautiful assets that make it one of a kind and make sure to visit the northern banks of river Brahmaputra in the evening time to endure true magic with your naked eyes.

MAYONG- THE LAND OF BLACK MAGIC

Mayong, an enchanting village filled with secretive magical powers and surrounded by amazing flora and fauna. It is a cluster of a village situated in the banks of Brahmaputra River in the Morigaon district of Assam. The place is filled with stories of black magic and magician which was practiced in the town and was passed through generation since then. The village is surrounded by beautiful Pobitora Wildlife Century. It is a perfect magical gateway from the city life.

Dibrugarh is the largest city of Assam and is also an emerging industrial hub of North-East that has well-connected airports with major Indian cities. The city is a budding spot of business and leisure trips as it is loaded with nature and business opportunity and also a chance to unwind yourself. It produces about almost 50% of the total tea of India hence earning the name ‘tea city of India’. Besides tea, timber and oil is also an important source around the city. Rafting is a must in the Brahmaputra River to see the beautiful remote areas for a breathtaking experience.

HAFLONG- THE SWITZERLAND OF EAST

Haflong, which is also known as White Ant Hillock has the most dramatic and picture-perfect scenery one will ever witness. Filled with amazing green hills with the beautiful captivated sky all round the day is a must-see sight. Its main attraction is the amazing Haflong Lake that has sparkling clear water. It is often referred to as the Scotland of East, it doesn’t have snow as Scotland but the view is so much as beautiful as Scotland or maybe even more.

It is one of the most important city of Assam state. The country’s very first oil refinery was established here, back in 18 century, the period when oil was first discovered and the city is often referred to as ‘the oil city’. But this city is so much more than just an oil city. There are so many places to visit. It has one of the best golf courts due to its British colonialism. Digboi oil refinery is the first-ever oil refinery to be ever set up in Asia. A visit to Margherita, a town with a lush tea garden, 14 km away from Assam is a must to unfold the true beauty of Assam for your vision.

Kamakhya temple is a 16-century temple dedicated to tantric goddess Kamakhya Devi who is another form of goddess Kali. Back in the century, the temple was a seat for various powerful tantric cults in India. There are many tales about the existence of the Kamakhya temple ranging from Shiva dismembering the body of Sati, the Great Mother Goddess which fell where the temple stands now to lord Vishnu sending his chakra to cut Sati’s dead body so that Lord Shiva was angry for Sati’s father deed and would calm down from his dance of destruction (Tandava) and stop the world from ruin and a part of Sati’s body fell where the temple stands today. The shrine has a flight of steps down to a dark mysterious chamber where the main Devi is wrapped in a red sari. The temple is full of hope where people visit all around the world to seek the blessings of the Devi.

A beautiful place covering 200 sq. Km, situated in the foothills of the eastern Himalayas. The place has wonderful hills and green forests with the sparkling Jia Bhoroli river flowing through it. Nameri is home to more than 300 species of birds and also the endangered White Winged Wood Duck. A bird seeing is a must when one visits Nameri, you are sure to be awestruck by the beautiful birds that fly freely there.

A sacred place to Hindu, Muslim, and Buddhist situated about 24km away from the capital city is a pilgrimage hub that people come to seek mostly spiritual enlightenment. It is believed that Buddha attained his Parinirvana at Hajo and the mosque, Powa  Mecca is believed to be built by the same soil used in making the mosque in Mecca. There are also beautiful Hindu shrines to explore as well like the Kedareshwar Temple, Ganesha Temple, Hayagriva Madhab Temple on Manikuta Hills. Every year many devotees visit this place all around the year making it a must-visit place for many due to its pilgrimage sight and the beautiful shrines.

THINGS TO DO IN WAYANAD – PLACES TO VISIT IN INDIA

THINGS TO DO IN MUNNAR – PLACES TO VISIT IN INDIA