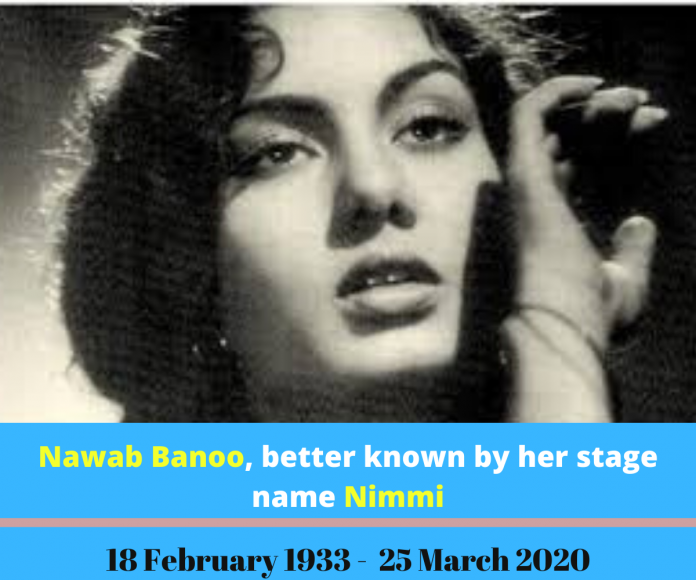 Bollywood actress Nawab Banoo, popularly known as Nimmi passed away at her residence on 25 March in Mumbai. She was 88 and was fighting for her life. Her last rituals have been performed on 25 March itself.

Many conveyed their condolence to her via social media, where Mahesh Bhatt was among the first to do so, where he tweeted “You may win your heart’s desire, but in the end, you are cheated of it by death. Goodbye Nimmiji.”

Rishi Kapoor also tweeted “RIP. Thank you Nimmi aunty for all the blessings and love for Bobby on its premiere release. You were part of the RK family. Barsaat was your first film. Allah apko Jannat naseeb kare. Amen.”

Nawab Banoo was born on February 18, 1933, in Agra as Nawab Banoo. Her father, Abdul Hakim was in the Military and her mother died when she was 11 years only. Nimmi went to Abbottabad to live with her grandparents. When Abbottabad shifted to Pakistan after the partition in 1947, she along with her grandparents moved to Mumbai to live in India. That’s where her passion for Bollywood and acting came as her grandmother’s second daughter Jyoti was a one-time actress and was also married to GM Durrani, a renowned singer and composer.

Nimmi made her Bollywood debut in Raj Kapoor’s film in 1949, “Barsaat” with co-star Nargis and also it was one of his most hit films. Reportedly the screen name Nimmi was also given by Kapoor himself. Her other notable films include ‘Uran Khatola’ (1955), ‘Bhai -Bhai’(1956), ‘Kundan’(1955). Her last release was K. Asif’s ‘Love And God’ a retelling story of the Laila and Majnu story.

Over time, Nimmi was having breathing problem and was in and out of the hospital.

Realme X3 Super-Zoom And Its Specification