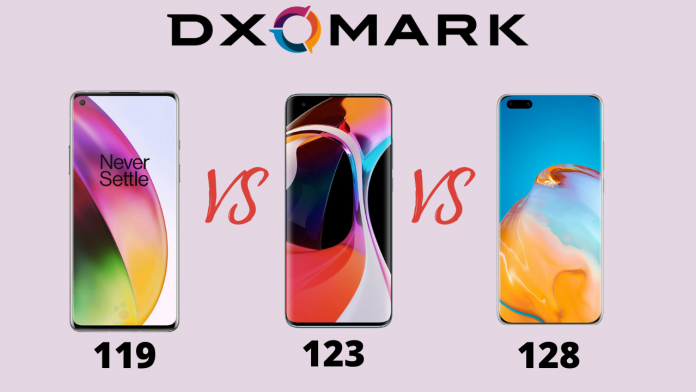 DxOMark Score has offered a comparison on camera hardware among OnePlus 8 Pro, Mi 10 Pro, and P40 Pro. continues to dominate its leaderboard. The top five devices include three from Huawei, with the Oppo Find X2 Pro and Xiaomi Mi 10 Pro occupying third and fourth respectively. DxOMark will soon announce the verdict of the Galaxy S20 Ultra.

Before its full review, DxOMark has offered a comparison on camera hardware among OnePlus 8 Pro, Mi 10 Pro, and P40 Pro. All of them carry “Pro” branding, but they have vastly different camera hardware.

According to DxOMark, the Mi 10 Pro has the most ambitious camera hardware among all the three devices. The OnePlus 8 Pro has a 1/1.4-inch main rear-facing camera with an optically stabilized sensor. The sensor includes an f/1.78 aperture and a 26 mm-equivalent focal length, which should deliver detailed and vibrant-looking shots. Quad-Bayer pixel-binning in the sensor should help maximize dynamic range, too.

DxOMark also suspects that the P40 Pro will be better than the OnePlus 8 Pro in ultra-wide-angle shots, too. According to the underlining tone from its camera preview, it is expected that the OnePlus 8 Pro will post towards the top of its leaderboard when the website’s review goes live.

The first phase of WhatsApp Pay Rollout to as many as 10 million users...