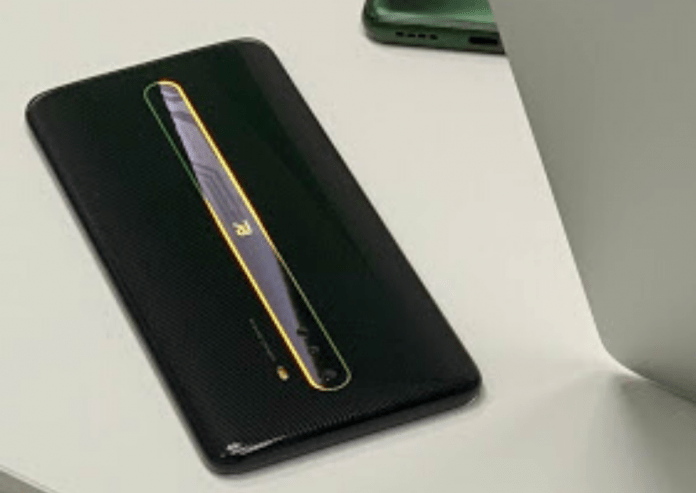 With mysterious specification, the Realme smartphone had leaked few live images showing off a peculiar rear design that looks like an Oppo Reno smartphone from 2019.

We already know that Realme X3 Superzoom is in progress, but its design has never been leaked previously. There are high chances that this mystery phone could be X3 Superzoom, but considering the old design of the phone, it could also be a shelved smartphone.

The smartphone will most probably have a quad-camera setup on the back with the ‘AI’ Quad Cameras’ strip, but one of the sensors seems concealed because of how the image was taken. There is the Realme logo at the back, which looks somewhat different from the standard emblazonment of the Realme brand on its smartphones released so far.

The image keeps us guessing as the Realme smartphone is kept next to the Realme X50 Pro 5G if it is another X series phone or not.

With codename RMX2086, the Realme X3 SuperZoom has appeared on various certification websites and the Geekbench benchmarking website and is listed to sport a Qualcomm Snapdragon 855+ processor, along with 12GB of RAM.

Possibly with the company’s UI skin on top, the smartphone will come running Android 10. As per the name, the phone will emphasize its camera, especially the zoom capability. The smartphone will be released in China first, followed by other countries.

UniSA develops pandemic drone to detect Coronavirus in the crowd

Microsoft Vs Apple: Microsoft Spend 4 times more on the advertisement