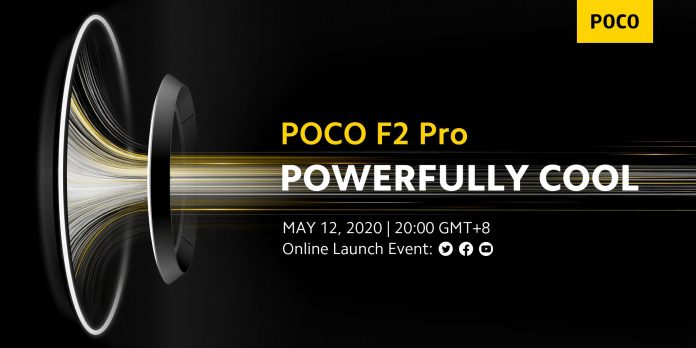 The new series by Xiaomi has been doing rounds of the Internet for some time now. Several reports of the Poco F2 series have tipped the alleged pricing and few specifications of the phones rumored to be a part of the series – Poco F2 and Poco F2 Pro.

Poco hasn’t confirmed any information about the series. The company recently confirmed the arrival of Poco product(s) on May 12 and that raises the chances of future availability of these products. Some previous reports point out that Poco will unveil Poco F2 and Poco F2 Pro at the global event on May 12.

The information on the launch was shared by Poco on Twitter. This tweet does not reveal the name of the upcoming Poco product, but the users started talking about the Poco F2 and Poco F2 Pro, therefore it is suggested that the post is about the aforementioned devices’ launch. Earlier this week, Xiaomi tweeted that a “second generation” Poco product is coming which indicates towards the Poco F2 series that is said to succeed the Poco F1 series.

According to a recent report, Xiaomi’s Spanish PR agency had sent out invites for a virtual Poco event which will take place on May 12. Another report claimed that Poco will unveil the Poco F2 Pro at the upcoming event.

The key specifications of the Poco F2 and Poco F2 Pro are not available as of now.

Poco F2 and Poco F2 Pro to be launched at the global event on...

MYSTERIOUS REALME DEVICE, COULD IT POSSIBLY BE THE NEW X3 SUPERZOOM?