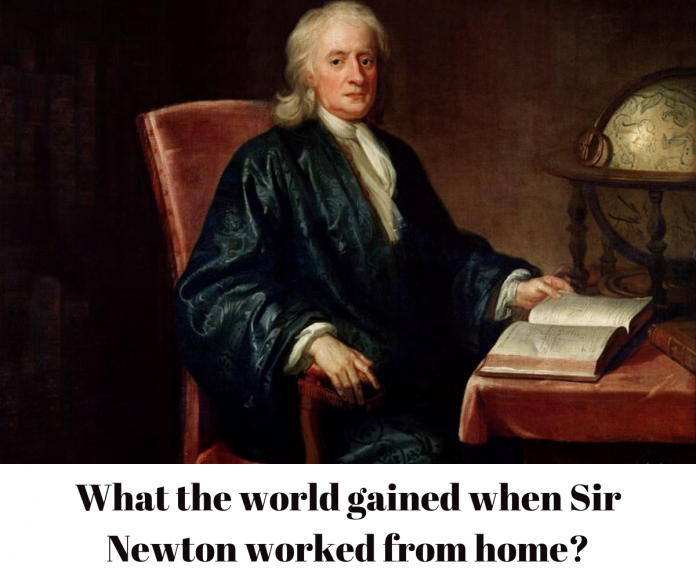 “ what we know is a drop, what we don’t know is an ocean. ” Said the great

Newton is indeed a man who doesn’t need an introduction, perhaps I will make an attempt to give one, to make you familiar with the pretty much unsung tales of his life. Issac was a wonderful physicist, an astronomer, English mathematician, theologian, and author, widely recognised as one of the most influential scientists of all time.

He changed the world using his weapon of knowledge and opened our eyes to new fantabulous imaginations, as many believe that every great scientist starts by being called crazy by the masses who never had the wit and the willingness to go beyond what’s known to them, to discover, what’s unknown to all!

The great child who changed the world, Newton was in his early 20s when the Great Plague of London hit. He wasn’t a “Sir” yet, didn’t have that big formal wig and that wise look on his face reflection of his genius. He was just another common college student studying at Trinity College, Cambridge.

It would be another 200 years before scientists discovered the bacteria that actually causes plague, but even without knowing exactly why, folks back then still practised some of the same things we do to avoid illness they prevented spreading in all the ways they knew then.

In 1665, it was a version of “ social distancing ” — a public health tool making a comeback a couple of weeks ago as governments, schools and many businesses, sending people home to try to slow the spread of the novel coronavirus and save lives.

It was the worst outbreak of the plague since 1348, The great plague of London (1665 -1666) claimed about 15% of London’s population. It was during this time that a young student at Cambridge – a certain Issac Newton, was told to continue his academic year at home, and found himself at Woolsthrope Manor. It was his family estate in Lincolnshire, located about 95Km away from college.

The world remembers 1665-1666 as a year of the terrible plague that covered the entire London with darkness and hopelessness, taking away the lives of millions. But to Newton, it was his ‘ Annus Mirabilis’ or marvellous year, that lead to numerous discoveries that changed the course of scientific thought.

Bored out of his wits with no social media to distract him, young Newton used his self-isolation time to work on several theories that eventually changed the world of science and mathematics. It was at his home he began to delve into the mysteries of how white light was split by a prism to create a rainbow of colours.

Studying the patterns of light, he began to work on his theory of refraction, concluding that all light is composed of coloured particles that come together to appear white. He gave the world the term “colour spectrum” and a crucial understanding of how lights work, which is the basis of all modern optics.

Greatly is said that a true genius is not the one who has the answer to all the questions but is the one who has the patience to reach to all the answers. These people are driven by curiosity and any second that we consider for leisure, they consider for improvising and that’s what makes the difference. He just didn’t stop there. Surely you have heard about the famous apple that fell from the tree that led to Newton’s discovery of gravity can you guess where the apple tree was located? It was Outside his window at Woolsthorpe Manor.

While the part about the apple landing on his head is a bit of stretch, his assistant John Conduitt’s notes of the time reveal some truth to the tale. “ in the year he retired again from Cambridge on account of the plague to his mother in Lincolnshire and whilst he was musing in a garden it came into his thought that the same power of gravity was not limited to a certain distance from the earth but must extend much farther than usually thought- why not as high as the moon… ”

It was during his quarantine period that Newton was able to refine his gravitational theory to the point where he was satisfied with his calculation of the earth’s gravity holding the moon in orbit. Gravity can’t be seen or touched, but with his calculations, it could be proved.

Working from home, Newton was able to tweak his calculations in peace, with no distractions. And then when he came to Cambridge in 1667, he went on to change the world forever.

Unlike many who lost their lives during the Great Plague of London, Newton lived a long and prosperous life, working and discovering, unveiling the mysteries of the future. He was 84 when he passed away in 1727, and was interred as Sir Issac Newton with honours in Westminster Abbey.

And today when I scroll down my Instagram wall all I see today is people posting pictures and sharing videos with captions and hashtags of quarantine day what so ever, not realising the seriousness of this situation and wasting their time on social media making it a trend to follow.

We always wondered if it was too late to combat climate change but Mother Earth has shown us that we can reverse it and help her heal if we all do it together … Through these testing times, India has seen a major drop in its noise and air pollution levels, Venice has dolphins playing in their dockyards, boars running around their streets, Rome has swans in their fountains and the pollution levels have dropped all over the world!

This is the world we need to protect. The COVID-19 pandemic, has already killed over 13,000 people and affected more than 3,08,500 people worldwide, infected more than 340 people in India with seven casualties though many steps have been taken it is time to stay indoors and wisely utilise our time.

“The time to change was yesterday; the time to wake up is now !”

OnePlus 8 Pro review: A phone you wish to have in your back pocket!

Twitch Remains No. 1 Streaming Platform in 2019