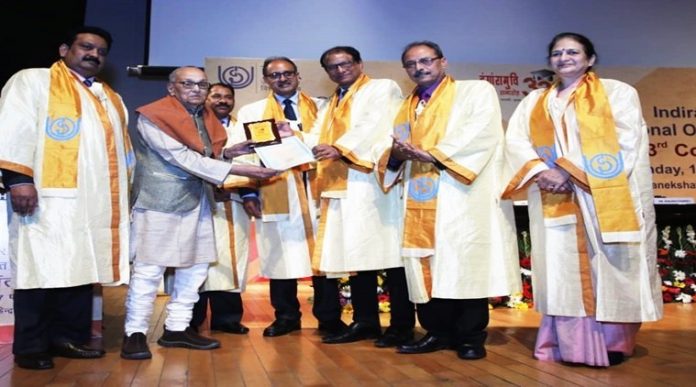 ‘Age is just number’. To understand this phrase more properly we present you a 93-year-old ‘youngster’ named Sivasubramanian who was the oldest student at convocation at IGNOU on Monday. This zest for knowledge of Sivasubramaniam, who received his Master’s Degree in political administration was praised by HRD Minister Ramesh Pokhriyal who described him as a ’90-year-old youngster’.

Sivasubramaniam was very passionate about studies from a very young age. After finishing his schooling in the 1940’s he wanted to go to college which meant shifting to Trichy or Chennai. But unfortunately, his parents felt ill and his relatives advised him to stay so he could take care of them. So instead he got a job and started working.

Later the family shifted to Delhi as he got a job of clerk in the Ministry of Commerce in the 1940s. Over the year his rank kept rising after appearing for various departmental exams. At the age of 58, he finally got retired as a director from the ministry in 1986. He was also offered an opportunity to attend a program at the United Nation but since he was not graduated, he couldn’t attend.

He even enquired about the correspondence courses available in Delhi University during his time at the ministry but he was transferred and couldn’t accomplish it. Even after retirement, he couldn’t pursue his dream of graduating as he wanted to give all his four children, 3 girls and 1 boy, the best education possible. Now all his four children are retired from the prestigious job. Also, some of his grandchildren had also completed their studies, some are married and one is studying medicine in the USA. At the age of 87, his wife was bedridden. One day her physiotherapist left early as he had to go to IGNOU to collect his form to apply at a course.

He asked the physiotherapist to enquire if he could also apply for any course. Later he came to know that there is no age bar at IGNOU, so he applied for BA in Political Administration and later applied for masters as well. His daughter helped him complete his assignments and also scribe during the exam as his handwriting became illegible with age.

During that time, his wife was in her last stage and he handed her his degree and told: “finally, your husband is a graduate”. After two days she died.

He also wanted to apply for MPhil but decided against it. He wants to continue pursuing other short term courses as well.

Microsoft will launch its Defender Antivirus Software for Android and iOS