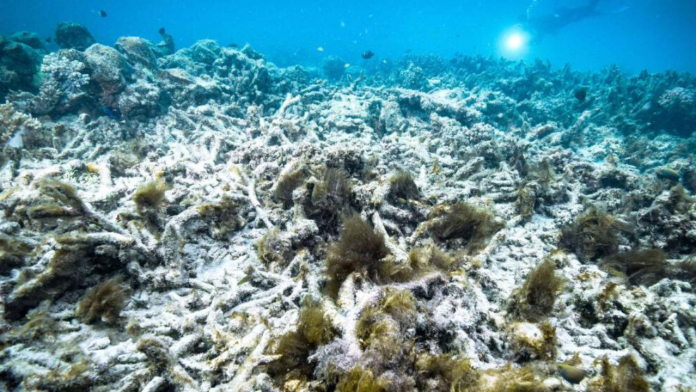 In the last five years, Australia’s Great Barrier Reef has experienced its third mass bleaching event. All three sections have been severely affected for the first time. It all happened in February when the Reef was exposed to the hottest month of water temperatures on record. Ariel surveys conducted by Terry Hughes at James Cook University in Australia during the last two weeks of March revealed that 25 percent of the Reef has been severely bleached and 35 percent moderately bleached. Its heartbreaking says, James.

In the last 30,000 years, The Great Barrier Reef has died 5 times. Some of the damages corals will survive this time, including more heat – resistant species and those that have only been lightly bleached. But many others were probably “literally cooked” at the peak of the country’s heat-wave in early 2020.

It has been presumed that others will surely die in the next few months from stress. Hughes and his team will conduct various surveys in October and November to estimate the death toll. He also showed major concern for the southern reef as he was worried that it has been spared in previous bleaching events and has not yet developed any resistance as the northern and the central parts. For even the fastest-growing corals to recover it normally takes a decade, meaning the latest damage will cripple the reef’s ability to bounce back.

Divers are also attempting to re-grow the reef with electricity. The high frequency of this heartbreaking bleaching in recent years has been driven by extreme climate change, happening because of humans. There is an urgent need to reduce the emission of greenhouse gases. If this does not happen we will have to witness more dreadful scenes because this is considered to be just the beginning and if we don’t stop now there won’t be any time left to stop the changes!

Lockdown in Delhi: Traders Body to CM Kejriwal Amid Surge in...

ABOUT US
Confused about anything, not able to make up your mind what to buy, which place to choose for a holiday destination. We got you covered for everything.
Contact us: [email protected]
FOLLOW US
© WWW.Feedogram.com